Birthplace of the Los Angeles Region 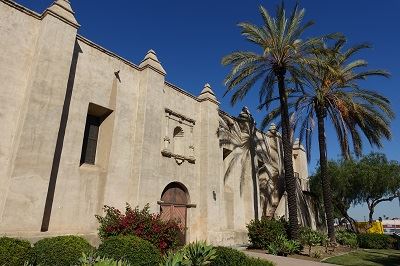 The city of San Gabriel, located about 10 miles northeast of Los Angeles, is known as the "Birthplace of the Los Angeles Region" and boasts a powerful and far-reaching history in California.

In 1771, Franciscan Fathers under the leadership of Father Junipero Serra founded the Mission San Gabriel Archangel, forming the foundation for the diverse and rich communities that now make up the Los Angeles region. The Mission San Gabriel was the fourth of the 21 California Missions and was known as the "Pride of the California Missions." The Native American population living in the area, the Gabrieleno-Tongva Indians, helped to build the Mission and remained a key part of the story of the region.

The Mission was known for its thriving agriculture industry, which continued even after the Mission was disbanded. It was also known for revolutionary water systems, and a restored portion of the elaborate water delivery system, the Chapman Millrace, sits in Plaza Park just outside the Mission grounds. The Mission was the starting place for the epic walk of "Los Pobladores" who walked nine miles to found the pueblo that is now the city of Los Angeles.

San Gabriel was one of the first townships in the County of Los Angeles, and the city was incorporated on April 24, 1913 with a population of 1,500 people. The Mission was the heart and soul of the city's history, culture and art, and the Mission District still serves that purpose in the city today. The district contains City Hall, the San Gabriel Mission Playhouse and several other historic buildings and sites that exhibit Spanish, Native American and early American history.

The site of the present City Hall was donated to the city in 1922 by Walter P. Temple, whose family was involved in much of the history and development of the region, including founding Temple City. The City Hall building was completed in 1923, and was built in the Spanish Colonial Revival style. In the early days, the building's twin second floor balconies were used to view events like the annual Mission Fiesta parade each September. In addition to the city offices and council chambers still located there today, the building originally housed the Police Department, the San Gabriel Justice Court and the Chamber of Commerce.

Across Santa Anita Street is the old Bank of San Gabriel, built in 1915 in the Spanish Colonial Revival style. The building, purchased by the city in 1969, now houses the popular Lunas Mexican Restaurant.

The Mission Playhouse is the jewel of the Mission District and a center for arts and culture in the San Gabriel community. The building was built in 1927 to house John Steven McGroarty's iconic "Mission Play," which told the story of the California Missions. Today the Playhouse is home to many exciting and unique events and performances throughout the year. Next to the Playhouse is the Grapevine Arbor, which houses an offspring of the historic "Mother Vine" planted in 1861 from a clipping from the Mission. The San Gabriel Winery was among the world's largest in the late 1800s.

The Hayes House is a beautiful Victorian home built in 1887 that housed one of San Gabriel's first prominent families. Mary Ruth Hayes was born in the house and lived there all her life. She was a teacher in the San Gabriel School District. Hayes left the home to the San Gabriel Historical Association in her will, and the house is now a museum that is open to the public.

There is so much more to learn about San Gabriel history. Take the guided Historical Walk with the city's brochure or read more about local history on the Police Department page.