COVID-19 COVID-19 vaccinations available to those 16 and older. Visit MyTurn.CA.gov. Read more... Do not let your guard down. Slow the spread. Wear a mask. Minimize travel. Avoid gatherings. Read more... 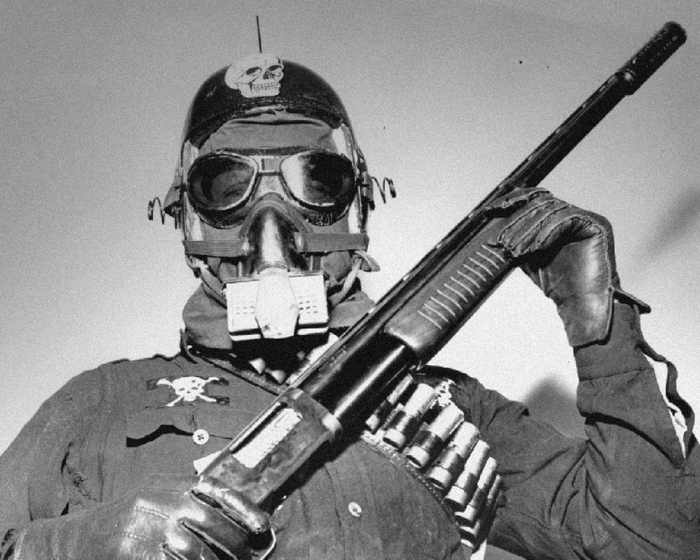 One of the most unusual crime sprees to occur in San Gabriel was perpetrated by none other than the "Man From Mars." The bandit was dubbed the "Man From Mars" because of the bizarre attire he wore while terrorizing supermarkets in the western San Gabriel Valley. The notorious bandit, later identified as 27 year old Forest Ray Colson, was described as a commuter bandit because he made it a habit to return to his parents' home in Oklahoma City, Okla., between robberies. Colson disguised his identity during the holdups by wearing a leather football helmet, goggles, gas mask, hood, and tight-fitting black clothes with boots resembling a motorcycle officer's uniform.

The "Mars" bandit staged five successful holdups of supermarkets in a period of six months netting more than $55,000.00 before his luck ran out on Thursday evening, October 12, 1951. Armed with a 12 gauge shotgun and a pair of 38-caliber revolvers on his hips, Colson entered the Boy's Market at 120 East Valley Blvd. and forced the cashier to turn over the evenings receipts, totaling $13,675.00. Before he could escape with his loot, however, Officer Harry Stone and his partner E.F. Nelson arrived on scene. The officers were just a block away when the call for "all available units" came out over their radio.

Soon after entering the store, Officer Stone noticed the bandit, dressed in his usual attire, stepping out of the cashier's office, a mere 54 feet away. As the two faced each other for a moment, the bandit appeared to lose his courage and made a last ditch effort to duck back into the office. Officer Stone reacted without hesitation and fired one shot with his 38-caliber revolver, striking the bandit once in the left side of his head. The bandit, who fell instantly to the ground, was still clutching his shotgun in one hand and the bag of cash in the other hand. Forrest Ray Colson, aka, the "Man From Mars" died two hours later at the jail ward of Los Angeles County General Hospital.

The original outfit worn by "The Man From Mars" at the time of his capture is on permanent display at the San Gabriel Police Department facility.