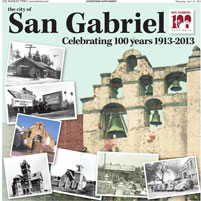 San Gabriel is a fascinating modern community living up to its motto: "City with a Mission."

This special section of the Los Angeles Times traces the history of San Gabriel from the late 1700s when Franciscan Fathers established the Mission San Gabriel Arcángel with help from the local Gabrieleno-Tongva tribe, to the population growth of the early 1900s, to this year and the 100th anniversary of San Gabriel's incorporation.

Written by Amy H. Roberts, the 16-page keepsake, recounts the history of the Mission Play, Grapevine Arbor Park, La Laguna Playground and the success of WHAM-O, which made hula hoops and Frisbees in San Gabriel from the 1950s to the 1980s.

It is a fitting tribute to the community and we hope it inspires you to join us in celebrating our diverse culture and vibrant history. 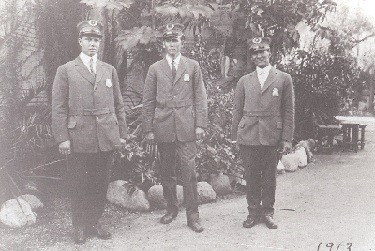 Law enforcement in San Gabriel had its official beginnings shortly after the city incorporated on April 24, 1913, although the city's law enforcement was not officially referred to as a "police department" until years later as staffing increased. 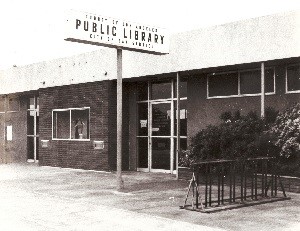 Left: Prior to completion of its current home in 1967, the San Gabriel branch of the Los Angeles County public library was located in this building on Del Mar Avenue.

One of the few services not provided directly by the city to its residents is the public library. San Gabriel's library is a branch of the extensive Los Angeles County library system, and today's Centennial Corner salutes the library as part of February's Centennial focus on community education.

The library was founded in 1915. Early in its history the library was located in the historic Mission Playhouse gift shop building, a part of today's Adult Recreation Center at 324 South Mission Drive.


The library later moved to a location on Del Mar Avenue where it remained until the current San Gabriel branch library opened at Del Mar Avenue and Angeleno Avenue in 1967.

To support the branch, the Friends of the Library was founded in 1967. A historical mural was painted in 1984.

The library is located at 500 South Del Mar Avenue at Angeleno Avenue You can reach the library at 626.287.0761, or learn more at http://www.colapublib.org/libs/sangabriel/index.php.

San Gabriel's Street Names Have Changed Over a Century


The following information was obtained from a June 1887 tract map of East San Gabriel, prepared by J. P. Culver, Civil and Hydraulic Engineer, which was later in the possession of Mary Ruth Hayes. The map was made 26 years before San Gabriel became a city.

It is not known when or why the names of streets were changed, although upon incorporation many cities replaced numbered streets with names, and made other changes to avoid duplication with post office and county records. The East San Gabriel tract map covered the area between Elm on the north and Chestnut on the south, Vista on the east and Del Mar on the west. Name changes before 1913, within the present City of San Gabriel, may be in County records. In an upcoming issue of the Weekly, we'll visit some street name changes made shortly after the City incorporated in 1913.


It's a Mission Play Mystery!


Where Was the Famous Mission Play Sign Located? Our Sleuth Knows 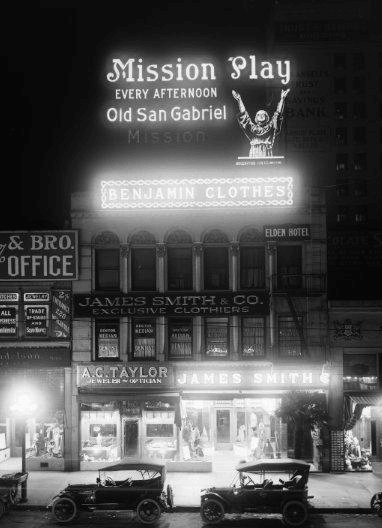 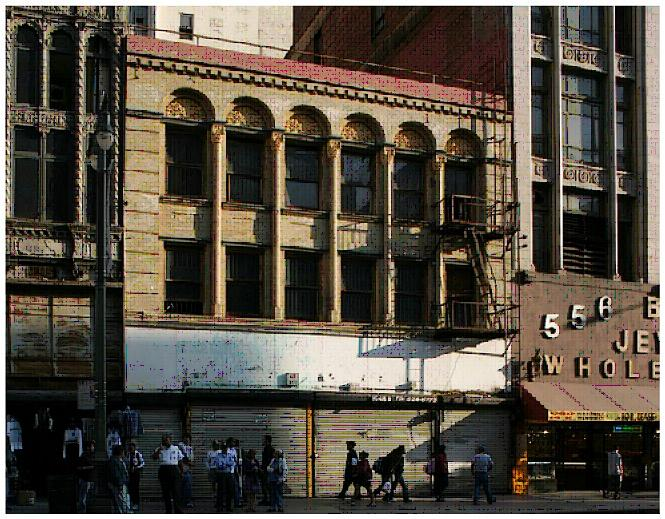 Readers of this space will remember that last week, we shared the photo at left, capturing an image of an illuminated roof sign that directed appreciative visitors to San Gabriel for the famous Mission Play, seen by more than two million people during its more than two-decade run.

Last Thursday evening we shared this remarkable image with Nick Smith, librarian with the Pasadena Public Library and chair of the San Gabriel Valley Civil War Roundtable; we mused over where in downtown Los Angeles this building might have been.

Using clues in the photo, Smith identified the building as the Elden Hotel, located in the 500 block of South Broadway. Smith notes, "I think this is the building where the sign for the Mission Play was, in 1915. It actually is on Broadway between 5th and 6th…I could have sworn it was on Main, but here it is." He tracked it down from an image on a website of downtown Los Angeles buildings.

The Mission Play was once one of the most famous tourist attractions in Southern California, with visitors from across the country traveling by rail to San Gabriel to experience both the historic mission and the (then) outdoor spectacle that was known as The Mission Play. The play moved indoors into its sumptuous new home in 1927 following seven years of planning, fundraising and construction.


Courtesy of Wayne and Cindy Scott


What Did Our Golden Jubilee Look Like 50 Years Ago? For those of you eagerly anticipating the arrival of San Gabriel's Centennial Celebration starting
January 1, we have a time travel adventure for you today. We have reprinted above the front page of the San Gabriel Sun for May 2, 1963 as San Gabriel celebrated its first 50 years of incorporaton. As today's Council Weekly went to press, more than 150 good folks will be attending today's fundraiser at the San Gabriel Hilton to help raise the money needed to finance the celebration. Watch the Council Weekly for further reports … and regular peeks into our history as we ready ourselves for the grand event!

The Mission Playhouse came to life Tuesday evening as the first stage reading of the fabled Mission Play in 50 years took place on our stage. The event, prelude to a proposed staging for San Gabriel's Centennial, began with a dramatic musical selection on the Mighty Wurlitzer as invited guests were greeted by members of East LA's Classic Theatre along with Playhouse staff. Guests also had an opportunity to view artifacts from the original Mission Play and tour areas of the magnificent Mission Playhouse.

East LA Classic Theatre is partnering with the Playhouse to produce an adaptation of the famous play for the first time in decades.

After the opening reception, guests were welcomed by city staff and Mayor Sawkins, followed by a presentation from Executive Artistic Director, Tony Plana (left). Selected scene readings from the Mission Play were performed by a talented cast of actors.

Congratulations to our Playhouse staff on a successful launch to this unique theatre venture.

Own a Piece of History 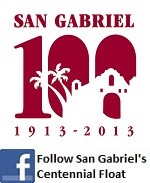 As reported in the winter issue of Grapevine, residents can own a piece of City history! San Gabriel is replacing street name signs citywide. Many of these signs - some of the oldest among Southern California cities - date back to 1966, making them potential collectors' items of interest to families and businesses that would like a piece of San Gabriel history as we approach the 2013 Centennial. Thus far over 300 signs have been sold.

There are still a lot of collectible signs left! To defray the cost of the project and reduce its impact, the signs are available on a first come, first serve basis for $35 each. If you are interested in acquiring an existing street name sign please contact, Patty Peña at (626) 308-2825 or by email. 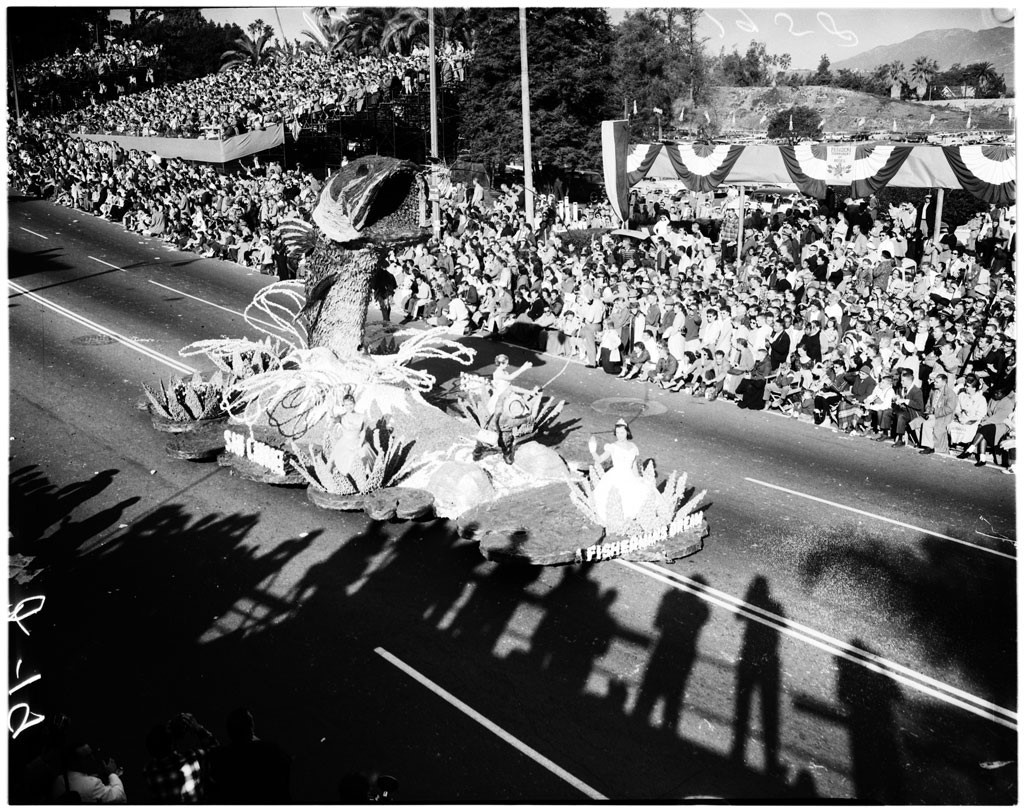 As San Gabriel moves closer to its 2013 Centennial, Council Weekly will feature regular short items regarding San Gabriel's past. This week we focus on the Rose Parade.

San Gabriel's first entry, sponsored by The Mission Play, was a festive, flower-bedecked homage to the Mission in 1913; and for a period of 35 years ending in 1972, San Gabriel was a regular participant in the New Year's spectacle. Here's San Gabriel's 1958 entry, "Fisherman's Dream," as it passes by Carmelita Park, now the site of the Norton Simon Museum.

Now, after a 40 year absence, San Gabriel is planning a triumphant return to the Tournament of Roses on January 1, 2013 in honor of San Gabriel's Centennial. If you are interested in donating to the project, which will be completed without City funding - contact Sponsorship Chairman Mario De La Torre at (626) 308-2803.

Centennial Corner, a new feature in the San Gabriel Grapevine newsletter, will feature quarterly stories between now and December, 2013 on aspects of San Gabriel's history. The first feature, focuses on the tale of how San Gabriel got its first fire engine.

Have Something Historical to Share? We Want to Know!


Do you have items to share? We would welcome correspondence, newspapers (i.e. the original San Gabriel Sun, or the former Alhambra Post-Advocate), business giveaways, photos of old buildings or sports teams or events. If you would like to retain the originals, we would be happy to scan the items and return them to you.

Take a look in your attics, and think of what you can help us collect for future generations to enjoy! If interested, please call the Museum at (626) 308-3223 and leave a message for Camilla Lopez or Ellie Andrews.

Note: The San Gabriel Historical Association is a 501 (c) 3 organization, and donations are deductible to the extent permitted by law.