The Los Angeles County Metropolitan Transportation Authority (Metro) and Caltrans are studying options to extend the SR-710 North from Alhambra to Pasadena.

From Metro/Caltrans:
"Caltrans and Metro are working together on the State Route 710 North Study to evaluate mobility and find traffic congestion solutions between the western San Gabriel Valley and the east/northeast area of Los Angeles. The transportation network in this area was started more than half a century ago but was never completed. Population growth will make traffic congestion worse and result in more traffic accidents, air pollution and related illnesses, and hurt the Southern California economy if nothing is done.
The Study is funded by Measure R, which was passed by two-thirds of Los Angeles County voters in 2008, mandating transportation upgrades throughout the County. The measure specifically allocates $750 million for the 710 North traffic congestion relief efforts." 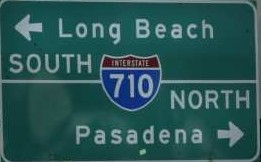 The Metro Board of Directors - in a 12 to 0 vote - have elected to fund local road improvements instead of closing the SR-710 Northbound gap.

In response to the vote, the 710 Coalition (a group which includes San Gabriel, Monterey Park, San Marino, Alhambra and Rosemead) released the following statement: "The 710 Coalition continues to support the tunnel as the best alternative for completing the freeway. A freeway tunnel will reduce congestion and air pollution in local neighborhoods, provide a missing link to the gap in the regional freeway system, reduce emissions and decrease cut-through traffic in surrounding communities. The tunnel reduces emissions and local street vehicle miles traveled: by 9% in Pasadena, by 12% in South Pasadena, by 7% in San Gabriel and by 14% in Alhambra."

For more information on the SR-710 North Study, visit: http://www.metro.net/projects/sr-710-conversations/.

For information on and opinions from the 710 Coalition, visit www.710coalition.com.


SR-710 North Study - An Evaluation of the DEIR/EIS